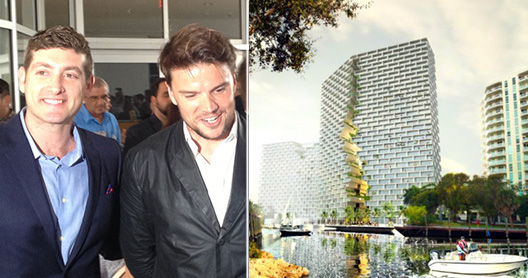 Bjarke Ingels wants the public to understand that bold, urban architecture can create sustainable ecosystems. It is a principle that he is fighting for: Right now, the award-winning Danish architect is battling Fort Lauderdale over his residential project, Marina Lofts, and the fate of a rain tree.

The 38-year-old architect gave a presentation Monday at the Museum of Art Fort Lauderdale, the first of three consecutive starchitect-studded South Florida real estate events this week, on his firm, Bjarke Ingels Group, and its 12-year evolution from designing residential buildings in his native Copenhagen to the conceptually playful Marina Lofts.

Famous for his Ted talk and a slate of awards for innovative design, Ingels is part of a growing cast of internationally-renowned making an imprint on South Florida.

As part of Portman CMC, Ingels is going head-to-head with his former practice, OMA, the urban design team of Dutch architect Rem Koolhaas, for the $1 billion bid to redesign the Miami Beach Convention Center. Portman will unveil a three-dimensional representation of its blueprints for the redesign on Tuesday, offering up Ingels and two colleagues for questions.

Later in the week, Ingels will attend the Terra Group’s groundbreaking ceremony of his curvy residential towers in Coconut Grove, the Grand at Grove Bay.

The Marina Lofts project may be the most polemic of the three.

The uneven residential towers with Lego-like pieces built out of each to create an opening that expands public access to the New River are considered by some as an important stamp of innovative design in floundering downtown Fort Lauderdale, while others oppose the project because it seeks to uproot and replant a nearly century-old tree.

The 998-unit rental building would offer units starting at $1,100, an attractive prospect in market environment of rapidly-rising rental rates and a housing shortage.

The developer, Asaf Cymbal, a Brooklyn native and Vassar and UCLA Law graduate who also owns a restaurant and bar in Miami Midtown, said he interviewed at least 12 architects before selecting Ingels, whose firm BIG received notoriety for its innovative residential buildings in Copenhagan.

The site currently boasts a small marina and boat storage and a protected rain tree the developers plan to relocate to the southern end of the site, which they would donate as a public park.

Environmental activists and others oppose the project, saying it threatens city and natural history. Cymbal said he consulted with the world’s foremost arborists, pledging a $1 million bond on the tree surviving in its new spot.

After eight hours of public debate, the project prevailed at a recent meeting of the city’s Planning and Zoning Board. The City Commission will vote either July 2 or August 20, Cymbal said.

Ingels is known as much for his politics as his design, from Copenhagen’s future trash-to-fuel plant belching C02 smoke rings, a symbol and public reminder of the cost of consumption, to the Dutch pavilion at the Shangai Expo 2010 on sustainable cities, where the Scandinavian capital’s famous mermaid graced one floor of the bikeable swirly structure, projected back to Denmark through an installation by the dissident Chinese Weise, who in effect broadcast China’s only uncensored live TV stream.

And the seemingly light-hearted architect seemed to revel in the politics of the Marina Lofts project.

“It’s my impression that Fort Lauderdale is capable of delivering quite incredible public participation for a project such as Marina Lofts,” he said. “It’s normally exclusively the negative voices who show up whereas in Fort Lauderdale, it was really a marvel to see supporters almost like threatening to go beyond the capacity of the space.”

He described the contest for the Miami Beach Convention Center as “a complex political process” and had to navigate the tenets of green design to win local approval for BIG’s two female silhouetted condo towers on the site of the recently demolished Grand Bay Hotel in Coconut Grove.

“Our vision was to create an eco-conscious residential project so sculptural and visually spectacular that it would become a statement for a new Coconut Grove,”  Terra Group co-founder David Martin said last week, announcing the project’s ground breaking.

“When I met Bjarke, I knew instantly he was the right architect,” Cymbal told The Real Deal, adding he learned to appreciate great design from growing up in a public housing project in Brooklyn. “We met in a bar in Tribeca, I think it was the Odeon?”

“The Odeon, where Bret Easton Ellis used to scribble Less Than Zero and American Psycho,” added Ingels with a chuckle.

BIG set up a satellite office in New York a year and a half ago after being commissioned by Durst/Fetner to design a luxury condo tower sandwiched between Manhattan’s West Side Highway and 57th Street in Hell’s Kitchen. The result is a distorted pyramid that maximizes residents’ exposure to the sun and leaves open a miniature of Central Park.

Cymbal, who grew up in a Coney Island housing project, striking out as a real estate investor in about eight years ago, said he was fascinated by Ingel’s portfolio, illustrated as a comic book (Ingels had intended to draw comics when he went to university), and a Ted talk on hedonistic sustainability, an idea that design should be fun and serve not only the function but the “dream” of modern societies.

The developer and the architect share a Generation Y view favoring green urban design over parceled-up suburbs, and a sense of whimsy and wonder and possibility as a way around grim environmental predictors.

“I think my generation maybe doesn’t have this Edward Scissorhands kind of fantasy about a suburban home,” Ingels said. “Maybe they actually want to opt for a more urban lifestyle and the cultural and social elements living in a more city-like environment can offer.”

In South Florida, Ingels is part of a growing cast of internationally-renowned architects active in the region as all-cash deals fuel a recovery from the market crash five years ago.

“I think development in South Florida has until recently been almost exclusively car-dependent and as such it’s a been a quite suburbanized urban landscape,” Ingels said.

“I think what you’re seeing now as a tendency is an interest in creating well-functioning urban cores that have a human scale, that have mobility, that have attractive outdoor spaces. In that way, what we’re doing here, in Coconut Grove and Miami Beach is somehow similar even though each has its own ingredients.”