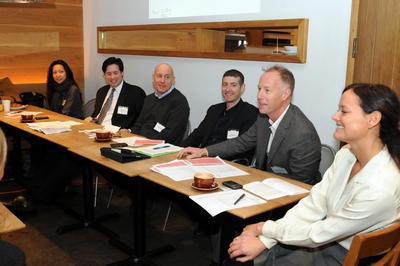 Cymbal Development nabbed the Cabi New River development in Fort Lauderdale out of bankruptcy. (It’s the equivalent of a story about a gallant knight and a damsel in distress.) Made up of six acres on the south side of the New River across from Las Olas Blvd and adjacent to Related Group’s three-acre holdings, the site was valued at $31M at its peak. Cabi assembled it for $21.5M over several years and HSBC had a $17.5M loan on the property. Cymbal Development bought the site for about $11.5M free of HSBC’s mortgage and with the permission of Cabi and the bankruptcy court.

Cymbal Development prez Asi Cymbal (third from right at a Council of Fashion Designers of America event last year) says he intends to develop an appropriate mixed-use project of international stature desirable to the urban core waterfront location. Asi has developed approximately $1B in real estate in Los Angeles, New York, and Miami. He built and owns Midtown Center, a retail complex on North Miami Avenue, directly across from Midtown Miami and is one of the largest landowners in the Miami Design District. Cymbal is in the midst of a $100M equity raise and has plans for the development of $500M in projects in South Florida over the next several years